As such, the conservation and development of the indigenous forests and the achievement of conditions that are as close to nature and as unaffected by humans as possible, is a key objective of the National Park. The National Park’s forests have evolved over millennia.

After the last Ice Age, around 10,000 years ago, deciduous forests dominated by beech trees formed in the Eifel region and across Central Europe. Over recent centuries, the impact of humans has had a considerable effect on the spread and appearance of the forests.

The forests of the Eifel region have completely disappeared in many places as a result of the use of wood for firewood, to produce charcoal, the use of oak bark to tan leather and the transformation of the forested areas into residential, grazing and arable land. Planned reforestation over the past 150 years, in particular with the non-domestic spruce, has considerably increased the percentage of forest.

These various eras of natural and cultural history have left their mark on the Eifel National Park. Guests to the National Park can experience a variety of forest types here: what appears to be the original forest, as well as former commercial forests.

Discover how natural forests are now once again developing from the former commercial forests, some of which are still not natural. 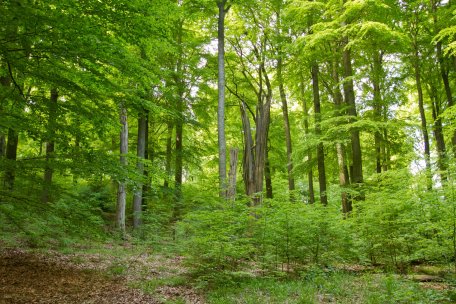 Enjoy the impressive beech and oak forests of the Kermeter hills. A. Pardey